The everything Wedding Wiki
Register
Don't have an account?
Sign In
in: Themed Weddings, Wedding Themes, Decor, Winter Wedding Ideas

Have a Star Trek wedding to show off your passion for Klingons, Vulcans, and more! 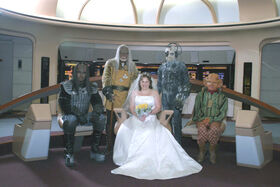 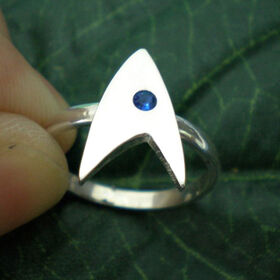 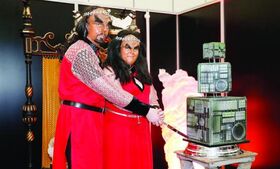 Purchase or make your own Star Trek attire for the bride and groom. The bride should wear a uniform dress. Design a veil and train using lace and sequins for a sparkling, celestial look. The groom should dress in a captain’s uniform or in a uniform that matches his profession. Have the groom wear a command uniform if he works in management, or a science uniform if he works in medicine or a scientific study.

Make or buy Star Trek uniforms for the wedding party and officiate. The officiate should wear either an admiral’s uniform or a captain’s uniform. Consider having groomsmen and bridesmaids dress as Star Trek aliens such as Vulcans, Klingons or Orions. Dress the ring bearer and flower girl as ensigns.

Create a music album with Star Trek theme songs suitable for a wedding. Use the theme from The Original Series as the wedding march. Present the newlyweds to the music from “Star Trek: Generations.” Have the first dance to the theme from Enterprise. Use music samples from the shows as the preceremony entertainment. Play some of Uhura‘s, Spock’s or even Picard’s greatest hits.

Decorate the wedding cake as one of the many ships seen in Star Trek. Choose from the many incarnations of the Enterprise, Voyager, a Bird of Prey or Borg cube.

Drink the ceremonial champagne from Klingon blood wine cups. Or, add blue food coloring to the champagne and serve it as Romulan Ale.

Community content is available under CC-BY-SA unless otherwise noted.