Flowers are an integral part of any ceremony or occasion. They are considered one of the best ways to express feelings and emotions. The same holds true for wedding ceremonies as well. Have you ever wondered as to when this tradition of using flowers in weddings, started? The history of using flowers and herbs in weddings dates back to time immemorial. The origin of wedding flowers is cited to ancient Greek. Here, flowers and plants were used to make a crown for the bride to wear and were considered a gift of nature. For some more interesting information on background of wedding flowers, read on. 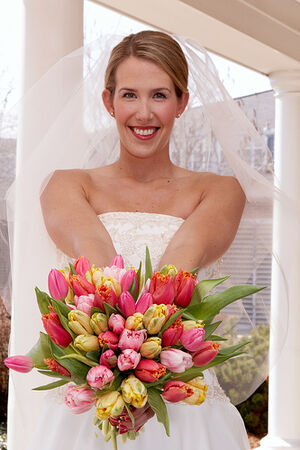 Originally, bridesmaids used to prepare floral decorations for the wedding such as garlands, bridal bouquet and boutonniere. Moreover, the bridesmaids even made poesies for the guests to wear. It was considered as a symbol of thanks. Though the time has passed, the significance of flower has stayed the same. Weddings are still considered incomplete without the usage of flowers. However, herbs have surely lost their place as they are now used intertwined with flowers by fewer cultures and religions. Primarily, the bridal bouquet was inspired from garland and wreaths worn around the heads of both the groom and bride. The garland was deemed to be a symbol of love and happiness. In effect, bridal bouquet and wreaths were originally made of herbs and bulbs of garlic. As per popular belief, herbs and garlic had magical powers to ward off any evil spirits that may plague the couple's future. Moreover, different herbs carried different meanings. For instance, dill is the herb of lust. It was believed that when a bride carried it with garlic, down the aisle, she would lust only for her husband. Sage is known as the herb for wisdom. When carried with the garlic, it was believed that the bride would gather great wisdom and learn goodness. Another tradition, which was followed when herbs were used in weddings, was preparation of a kissing knot with rosemary and roses tied together. This kissing knot was hung over the heads of the bride and groom, sitting at the reception table along with other guests at the bridal party. This was considered to bring good luck and lots of love to the wedding couple as well as to everyone sitting at the table. Small nosegays flower were placed beside every plate of the guests, who attended the reception. These flowers were left for the guests to ensure them happiness and long lives.

In Germany, the bride and the groom held candles, with flowers and ribbons tied to them. In India, relatives sprinkle flower petals over the bride and groom at the end of the wedding ceremony, to help ward off evil spirits. In Sweden, the bridesmaids carry little bouquets of aromatic herbs while the groom carries thyme in his pockets, to scare off any trolls. In Austria, the brides crown their veils with the flowers of life. In England, the bride and her bridesmaids walk to the church together. Usually, a small girl leads them to the church while sprinkling flower blossoms along the path. This is to ensure the bride, a life filled with flowers and happiness. This tradition is followed in modern weddings as well, featuring 'flower girls'. With this, it can be said that no matter what religion, country or community the wedding ceremony might be taking place in; the importance of flowers has still not been undermined. Flowers are still the best way to celebrate the occasion in its entirety.

Community content is available under CC-BY-SA unless otherwise noted.
Advertisement